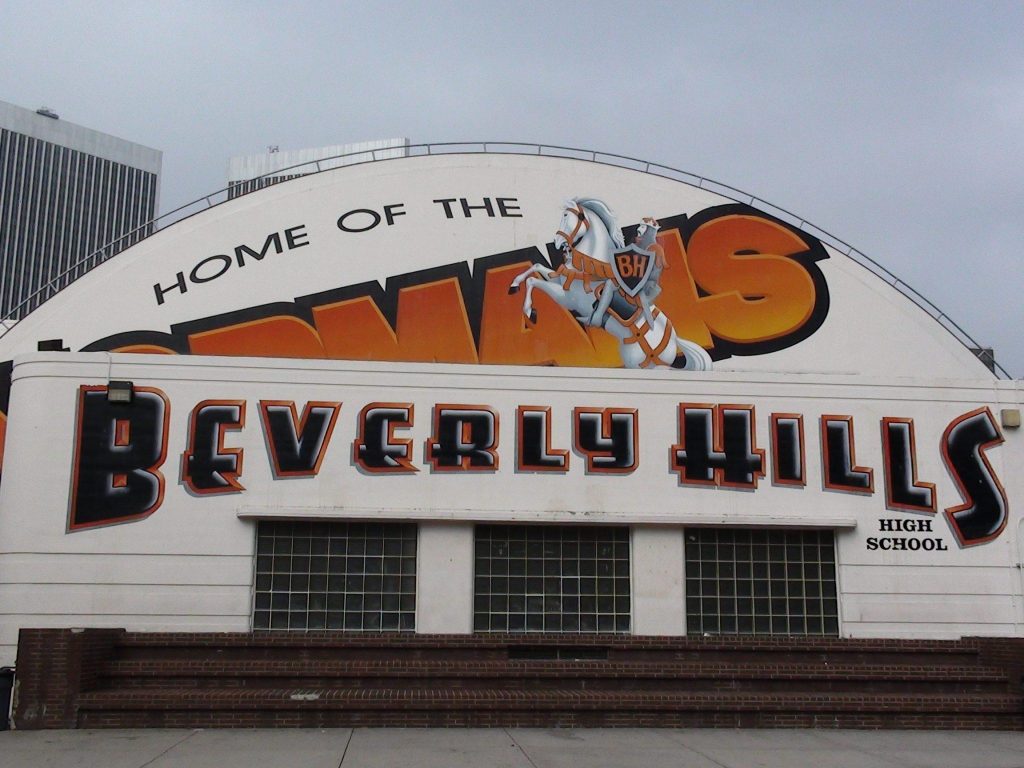 I have been teaching for 35 years, 33 of them at Beverly Hills High School. (My family’s connection with the school district, however, goes back even further than that–my grandmother at one time worked in the Beverly Vista cafeteria, and during the same time my father was a student at Beverly Vista, so I actually represent the third generation in my family to be associated with the district in some way–hence the pale orange page background, symbolic of “Norman orange.”)

For five and a half of my first six years at BHHS, I was Director of Forensics, responsible for running the debate and competitive speaking programs. During that period of time, I coached numerous students who qualified for state and national competition, including one state champion and one national finalist. I rewrote the curriculum for competitive speaking, created the curriculum for public speaking, served as secretary and then vice president in charge of student congress for the Western Bay Forensics League and as a district committee member for the West Los Angeles District of the National Forensic League–and then I lapsed into a coma from sheer exhaustion. No, seriously, as much as I loved competitive speaking, I realized that it was pulling me inexorably away from the classroom, so I decided to shift from being a 3/5 speech, 2/5 English teacher to full-time English. I look back fondly on my years in forensics and still use many of the skills I learned from that experience teaching the oral components of the English curriculum.

During my years in English I have taught all four grade levels and almost every ability level. I have contributed to the development of numerous courses in the English department, wrote the curriculum for the former Advanced Composition and Literature class for seniors, revised the curriculum for another former senior class, World Literature and Composition,and co-authored with Richard Sprouse an interdisciplinary AP Language and Composition-AP U.S. History course. More recently I was a member of the English Common Core summer workshop (2012), and helped rewrite the course description for Freshman Honors English (2014). Currently I am part of a pilot program involving the integration of technology in the English classroom. In addition to these curricular contributions, I was the sponsor of From Within, the high school literary magazine, from 1992 to 2012, I have been honors English coordinator since 1996, and I was department co-chair (with Jennifer Tedford) from the fall of 2005 to the spring of 2008.

Besides the various roles I have played in the English department, I have also been active in school-wide and district-wide efforts. I was the co-chairperson (with Diane Dawson) of the strategic planning curriculum action team during the 1980’s and served three terms as school site council chairperson during the 1990’s. Since 1987 I have also served several times as an officer of BHEA (representative or high school director-at-large) and in other capacities. I was a member of the superintendent’s advisory council during the time it existed and am currently a member of the superintendent’s academic advisory group and of the district technology committee. My most recent service at the high school has included membership on the grade book software, attendance, homework, IB exploratory and bell schedule committees.

I have been a recipient of the Beverly Hills Chamber of Commerce Teacher of the Year award, the BHEF Apple Award (2002), and the PTSA Honorary Service Award (twice), as well as being recognized as one of the most inspirational teachers in Los Angeles County (2004).

In my spare time (LOL) I am also a writer; I find that being able to view literature both from the creative side as well as the analytical side makes me a stronger English teacher. My first novel and the first book in the Spell Weaver series, Living with Your Past Selves, a young adult fantasy, was published in September of 2012. A short prequel, Echoes from My Past Lives, was published in March of 2013. The second novel in the series, Divided against Yourselves was published in November of 2013. This was followed by a short booklet, A Parent’s Guide to Parent-Teacher Communications (January of 2014). The third novel in the Spell Weaver series, Hidden among Yourselves, is due out sometime this fall. Other possible future projects include a writing textbook that will combine standard text with multimedia in order to appeal to a broader variety of learners, though that project will take a long time to complete. I’m also pondering a screenplay version of Living with Your Past Selves, which I hope at some point to submit to Amazon Studios. (Yes, a year ago I had never heard of it either, but it’s an interesting concept. Check it out at http://studios.amazon.com/.)

Since “One picture is worth a thousand words,” I have added a few pictures below. Originally I was just going to include recent pictures, but I thought there might be some point in selecting some high school pictures as well. You see, in junior high I got good grades but was painfully shy. Since I wanted to be either a teacher or lawyer, both of which involved high levels of communication skills, I knew I had to overcome that problem. The high school pictures below show what I was able to accomplish in just a few years. This display is not about me basking in my former glory 😉 (well, maybe a little ), but it is about encouraging students to pursue their dreams in the same way that I pursued mine. 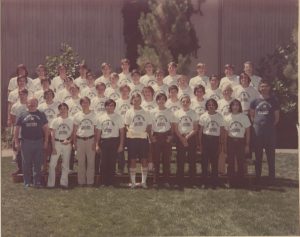 This is a group picture of my “city” at Boy’s State, a program sponsored by the American Legion in which the participants study state government by creating their own. I attended the summer between my junior and senior years. 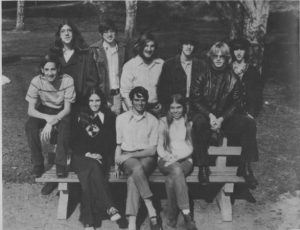 This is a group picture of Culver City High School’s student court one of the semesters I was chief justice (fall of my senior year). I was leaning toward law or politics at the time.

This is me at the National Senate Youth Program sponsored by the Hearst Foundation. I attended this program during the spring of my senior year in high school. The shots below are from the same program. 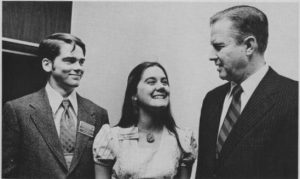 Me and my fellow California Delegate, Darcy Bradbury, with Assistant Secretary of the Navy Robert Nesen

National Senate Youth Program Group Picture (Yes, I’m in there somewhere, but I have yet to be able to find myself!) 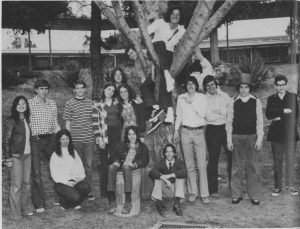 This is a group picture of ASB the semester I was ASB president (spring of my senior year). (Yes, some of them are sitting in trees. It was the ’70’s–give me a break.) 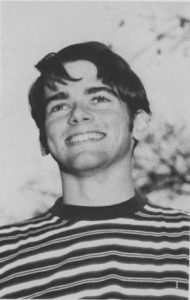 This is a picture of me as ASB president, taken at the same time as the group shot. (This is also how I know that sometimes it is better not to smile for the camera…) 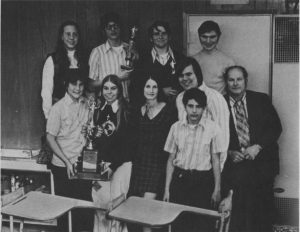 This is a picture of the forensics team during my senior year. After three years of high school speech activities, I was president (equivalent of team captain at our school). Senior year I came within one point of qualifying for the national tournament in extemporaneous speaking. I took first place in the western bay forensic league state qualifier for student congress and subsequently placed third at the state tournament. Not bad for someone who could barely speak a word in public as a freshman! In case you were wondering, this is the program that contributed more than any other to my gaining the confidence I needed to achieve me dreams. This process took a lot of work, but it was worth it! 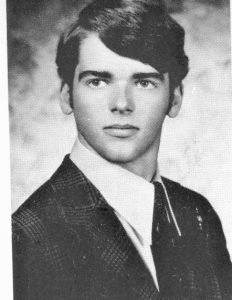 This is my senior portrait. 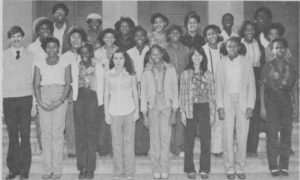 This is a picture of the leadership training group I taught at John Muir Junior High School. I taught this group, one 8th grade U.S. History class, and three English classes, each of a different type–baptism by fire! 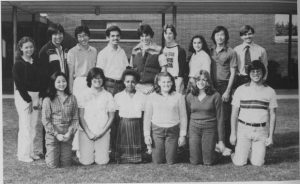 I coached forensics at Culver City High School (please, no Welcome Back, Kotter jokes!) from the spring of 1980 to the spring of 1981. Although I fell victim to declining enrollment, the speech program that I restarted continues to this day. I also taught government, economics, and English. 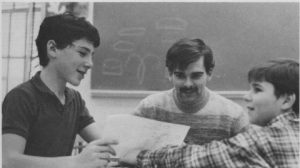 This is a 1983 shot of me, moved to Beverly and back to coaching forensics. (Strangely, enough, I think I still have that sweater!) 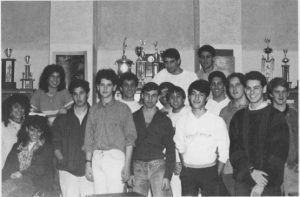 This is part of Beverly’s forensics team from 1987, the last year I coached. (Perhaps the fact that I am barely visible in the picture was some kind of omen!) In any case, that year we qualified the largest number of students for the national tournament since 1980, qualified a record number of students for the state tournament, and had one student make it to a final round at the national tournament for the first time since 1980. The following year one of the students went on to win the state championship. Then, three years later, the program was gone. It had so much momentum that a Beverly student made it to the final round of the national tournament the year after the program was cut–that has to be some kind of record, as well as an indication of just how much potential was lost. Anyway, guess which program would be my first choice for restoration when funds become available. This kind of educational experience, contributing as it does to thinking, writing, oral communication, and self-confidence, is truly an exceptionally effective investment. 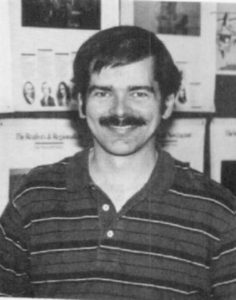 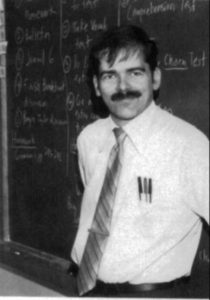 And here I am in 1997, looking a little more pixelated as the years passed. 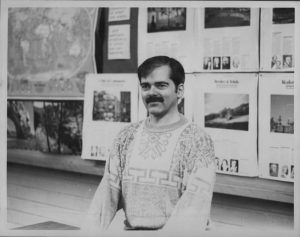 Unlike many of the other photos, which originated in yearbooks, this one was taken in 1998 as part of a photography project by Ashley Bezamat, one of the students on the interdisciplinary team that Richard Sprouse and I shared. 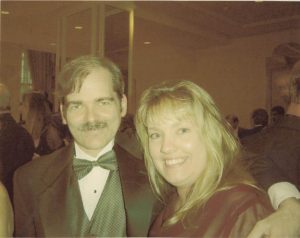 Here I am with Trisha Garcia, a good friend and one of the people who keeps the school running. This was taken at the Apple Ball the year I won the Apple award, an honor bestowed annually by the Beverly Hills Education Foundation (now known as The Foundation). 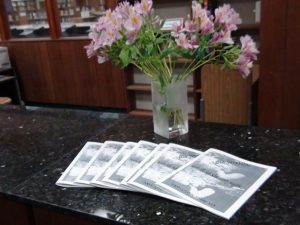 Here, much to the relief of those of you who are tired of looking at pictures of me, is a shot I took of copies of our 2010 literary magazine, From Within.

Wow! For someone who for years didn’t have anything on his Facebook wall, I certainly got carried away here! Once I started digging around in the old yearbooks and photos, it was hard to stop myself. I guess it was hard to stop because I was reminded of how I achieved my dream. (Yes, teaching is my dream job!)

May you achieve your dreams as well!