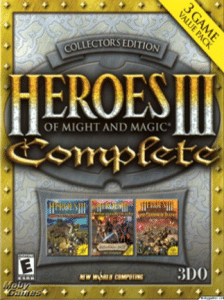 As I’ve mentioned before, readers of fantasy fiction are also often fantasy role-playing game enthusiasts, and I’m no exception. In this post, I’ll be talking about another one of my old favorites that retains a large group of fans–Heroes of Might and Magic III.

Basically, HOMM3 (and its expansions, Armaggedon’s Blade and Shadow of Death) combine combat with resource collection and town development.  Distinguishing features include the following:

With that amount of variety, it’s not surprising that the game has worn well. It also includes a map editor that enabled fans to create their own single scenario and campaign maps. It’s easy to find a ton of those with a quick internet search, and you could create your own as well. This feature alone makes the game, which comes with a decent collection of maps to start with, playable for many, many hours.

Benefits of the Horn of the Abyss Addon 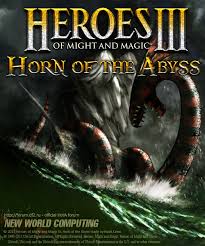 However, it’s inevitable with a game this popular that fans will want more. Ever since New Worlds Computing moved on to Heroes of Might and Magic IV, fans of HOMM3 have longed for more expansions of the earlier game. Enter Horn of the Abyss, a fan-created passion project that stays loyal to the style of the original while fixing bugs, improving graphics, and issuing the HOTA expansion. This pack includes a new town type, the cove (with captain and navigator hero types), new heroes, new artifacts, and a new custom map size (huge), among other things.

Yes, if you’re an HMM3 fan, HOTA is just as good as it sounds–and development continues. The HOTA crew announced a new town type, the factory, based on the Old West and featuring more advanced technology and some other new tricks. In other words, unlike some similar projects, this one doesn’t look as if it will be abandoned any time soon.

Discussing HMM3 and/or HOTA strategy would take many blog posts, so I’ll content myself with mentioning some of my personal preferences. (Your tastes may differ from mine, but that’s no problem–the game is flexible enough to accommodate many playing styles.

Want to join in the fun? Here’s where you can find HOMM3:

Note that the GOG version is HOMM3 Complete, while the Steam version, even though it’s a shiny HD version, only includes the original game, Restoration of Erathia, and not the two expansion packs. Unless you are committed to using the Steam ecosystem only, the GOG version is a better deal. It’s also worth mentioning that the Horn of the Abyss addon won’t function on a Restoration of Erathia only edition–you need to have the Shadow of Death expansion or the complete version.

Here’s where you can find Horn of the Abyss, which is free:

(The featured image was copyrighted by Vuk Kostic and licensed from www.shutterstock.com.)

3 thoughts on “Blast from the Past: Heroes of Might and Magic III”

Archives (for all blog posts)

To make this site work properly, we sometimes place small data files called cookies on your device. A few cookies are essential (help with proper site operation). Others improve site functionality. Click the appropriate button to accept or decline  the use of cookies. See our Privacy Policy for more information. You may change your cookie options any time on the privacy settings page or from the footer on any page or post. This site does not collect any personally identifiable data except what you voluntarily provide in comments or forms, and this site never sells any data to anyone. Please note that no site-based cookie blocking is 100% effective against third-party cookies. For complete protection on this and other sites, use your browser settings to block third-party cookies.