When I was teaching, I always tried to start the year off with some kind of icebreaking project, and throughout the year I found that the more standards I could address through the same lesson, the better. The “Introducing Yourself” project enabled me to do both at once, so I am offering it here in hopes that some of you might find it useful. (I designed it for high school, but I imagine it could be adapted for younger students. I also designed it for English, though it might conceivably be adapted to another discipline.)

Standards Related to the Project

You can see from the handout at the bottom of the page  what I was trying to accomplish through this project, but for convenience, I’ll also paste that information below. (Since it is straight out of the handout, the second person pronouns refer to the students.)

I don’t know about you, but though I heard a lot of talk about the digital natives who would soon be populating my classroom, most of my students, even a couple of years ago, were still digital tourists at best. Despite my age and the fact that my technological abilities were largely self-taught, I was generally far better able to use technology than all but a handful of them. Given how many career paths either developed during the digital age or require more advanced technological skills than they used to, the students’ apparent lag in this area was always a big concern for me. Starting to tackle it early seemed like a good idea. That’s why half of the standards above relate to technology.

Since I normally did this assignment early in the year, the students would also need a review of symbolism in preparation for literary analysis, and I have often found that the more literally-minded students could relate to visual symbolism more easily than textual symbolism.  That part of the assignment was a stretch for many students–but it was the kind of stretch they needed to make anyway, sooner or later.

During the years I worked with juniors and seniors, I observed how much trouble students had presenting themselves in a reasonable way in college application essays, a problem I’m sure would transfer to similar tasks, such as interviews. This assignment encourages students to think about what they are trying to accomplish, who their audience is, and how best to reach their objectives for that particular audience. Freshman year of high school is not too early to start that kind of preparation.

Though not absolutely required, technological access on campus (stationary computer lab, mobile lab, one-on-one device deployment) is desirable to get the most out of this project. It’s helpful to give the students some time to work during class, because questions will arise, and being able to answer them on the spot is helpful, especially for students less comfortable with technology.

Allowing the students different ways to complete the project is also essential. I’m not a big fan of the the free websites like Wix and Weebly,  mostly because projects completed in that way often have a generic feel to them, but they do have the compelling virtue of offering free website creations, and the students who are the most shaky about technology will probably appreciate the scaffolding. The same would doubtless be true for other free website hosts with which the students might be familiar. In that context, I’ll mention the less well known RCampus, basic accounts for which are still free. As you can see from the (possibly somewhat dated) screenshot below, RCampus offers reasonably full-featured content creation, including both a visual and an HTML editor. 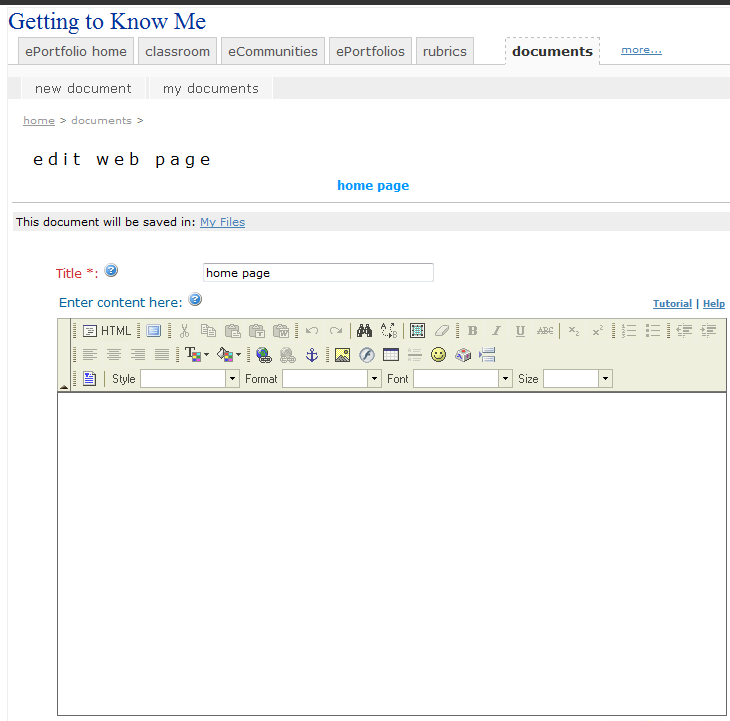 Another option I’d like to mention is the free website capability of WordPress.com. As you can see from the screenshot, the basic editing capabilities are still there, though the interface is not quite as robust as the one on RCampus. (Edit: Since the original publication of this post, the interfaces may have changed somewhat.) Fewer options may actually be an advantage, however, for those students who aren’t as technologically literate. There is also no denying the popularity of WordPress, so students are much more likely to encounter it later in life than they would be to encounter RCampus.

The advantage that sites such as RCampus and WordPress offer over Wix and Weebly is that the student is presented with a blank canvas, so there is less chance of a generic outcome. While that blank canvas may be anxiety provoking for some students, it is the kind of anxiety that ideally they should overcome by the time they graduate from high school, if not much earlier.

During my last year of teaching, when I was using this site as a classroom website and workspace, I offered the students carefully controlled access if they wanted to prepare their projects on here. I had the site set up with a much wider variety of editing options. Interestingly, only a small handful of students picked that option, I suspect because more options meant more of a learning curve.

Some of you may be justifiably concerned about students publishing these projects online. Indeed, your state and/or school district may have guidelines in place that sharply limit that kind of activity. The good news is that all of these alternatives do not require actual online posting to work. If you open your own free account on RCampus, students using RCampus can submit their work to you privately. The other alternatives mention allow material to be saved as a draft and include a preview mode. When the project, the students can give you their access information, you can open each project, and use preview to view and grade the project. Once the projects have been graded, and the students have asked any questions they need to about the grades, they can delete the projects, reducing any concern about long-term storage. That and the fact that there is no public access will probably mean there is no issue, though you can always consult with the appropriate administrator, just to be sure. Also, I never felt I needed to worry about this when I was teaching, but students sometimes publicly published one or more class projects online because they wanted to. You really can’t prevent that from happening, but for an extra level of comfort, you can add language to the project instructions that makes clear that publishing is not part of the project and is neither required nor recommended.

Students sometimes started the project reluctantly. “Can’t I just write an essay?” was the most common question. However, they usually enjoyed it, and some of them definitely improved in the areas the project was designed to enhance.

You can find a sample of the project here. I was trying to showcase what students who wanted to use this site would be able to do, so the output is more elaborate than what students would typically be able to produce. (Basically, it’s WordPress, but with the addition of the BE Theme’s Muffin Builder capabilities. It probably take some serious HTML to produce anything comparable without the automation.) Also, Toby is a fictional character from some of my instructional videos, so I tried to stay true to his voice. One thing about this assignment is that the responses to it will be very divergent–and they should be, since the students themselves are quite diverse.

If you are interested in using this project in your own classroom, I’ve included downloads for both the assignment and the rubric below. Feel free to adapt either or both to the needs of your specific situation. To avoid issues, I removed all licensed images. Please note that fonts are not embedded, so if you don’t have any of the fonts on your computer, you will want to replace the font with something you do have. In case you’re interested, I’ve also included a PDF viewer in which you can see the original project handout.


(The featured image was licensed from www.shutterstock.com and copyrighted by Phovoir.)