The title actually should read, “What Every Junior Teacher Who Could Conceivably Write a Recommendation Needs To Say to Students,” but that would be an overly long title, don’t you think?

If you’re anything like me, you probably find recommendation-writing a chore at best. The school schedule normally doesn’t make any allowances for the extra time demands, which are not at all evenly distributed. Although any teacher could theoretically write a recommendation, the rule of thumb these days seems to be that colleges prefer teachers in the core subjects (English, history, math, and science) for at least one and probably both recommendations, with other teachers occasionally being asked for supplementary recommendations. Not only that, but colleges typically prefer the most recent information. While this preference doesn’t completely rule out freshmen and sophomore teachers, it does tend to shift the bulk of the work to junior teachers. (Senior teachers are less impacted, because they won’t have known the students for as much time as junior teachers, especially if the students want recommendations in time for the early decision deadline.)

For the last several years I was teaching, I had two junior classes. Worse (from the standpoint of recommendation writing), they were junior AP classes, which meant that more of the students would be applying to colleges that required recommendations. Every year I wrote for at least thirty students, and in a couple of cases the total exceeded forty-five. Since it took me an hour or two to do a really good recommendation, that meant my minimum recommendation workload per year would be between thirty and sixty hours–and it could have been considerably more than that. If you have read this far into this article, you probably know what I’m talking about.

Ways to Handle the Workload

I knew I had to do something to make the task more manageable. Over time, I developed a series of steps to maximize the quality of my output, while at the same time reducing the time it took to create that output.

One of the epiphanies I had a few years back was that students don’t typically think about the recommendation-writing process until the beginning of senior year. By that time, many of them had shot themselves in the foot by not creating the kind of record junior year that would make them easy to write about.

That, my friends, is why, if you teach juniors, you need to get them to think about the process–at the beginning of junior year.

Yes, you’re reading that correctly. You need to talk to students about the recommendation process within the first couple of weeks of school, preferably while they’re still in the back-to-school honeymoon phase and haven’t had the chance to do anything that will complicate recommendation writing if they choose to ask you for one.

I once heard someone in the advertising business say it was always easier to advertise a good product. In the same way, it’s always easier to write a letter for a student who either did well throughout the year or who might have had a rough start but improved tremendously. Students who start out in a relatively mediocre place and just stay there, by contrast, are students for whom I always found it difficult to generate enough content, and I had to spend a lot of extra time working on the tone, so that the letter wouldn’t sound as if I was damning with faint praise–even though, since I always felt the need to be honest, the praise was sometimes rather faint.

Telling students upfront that they determine the kind of a letter a teacher can reasonably right for them isn’t a panacea, but some students do actually think more about the kind of impression they are creating on teachers than they would have otherwise. In the worst case scenario, when they still don’t really reflect on what they’re doing and make one or more serious mistakes, at least they are more likely to understand when I tell them they should probably look elsewhere.

What behaviors you tell students to avoid and what ones you tell them to cultivate may depend somewhat on your situation and the discipline in which you teach, but most of the things you emphasize will be common sense.  Think about students who were problematic candidates for recommendations in the past. Why were problematic? How could they have performed differently to eliminate or minimize the problems you noticed?

Yes, we probably all try to get students to have a positive attitude, try their best, and other things that would produce a good recommendation profile. What we don’t do often enough is get them to make the connection themselves between what they are doing this year, and how their attitudes and actions will shape their recommendations the following year. Students who are self-motivated often don’t need this kind of advice, but the vast majority need to at least be reminded. I don’t know about you, but every year I had some students who had an overly pragmatic attitude toward school, and if they didn’t see what they were getting out of something, they might not do it. If, for example, a student of this type wasn’t particularly close to a grade borderline, that student might not always complete homework. Something like that wouldn’t show on the transcript, but it would take a little of the glow off the letter I could write for that student.

Once I implemented this system with my students, I began to notice differences, particularly with students who in the past would have behaved much like the example in the previous paragraph. I saw more students go the extra mile, even when that mile wouldn’t make a difference on their final grade. As a consequence, they learned more–and they were easier to write for the following year. Also, the number of requests I got from students who really had shot themselves in the foot diminished, which, if nothing else, got me out of some awkward conversations.

If you found this material useful and would like to learn more about how I made recommendation writing manageable for myself, I would suggest checking out the booklet below, which details the rest of my process. Below you can also download a copy of the recommendation criteria I used to share with students. I apologize for the ugly gap; I had to removed the graphics for licensing reasons. I’ve also included a download for my recommendation request form. Keep in mind that the handout was designed for AP English students. Depending upon the level at which your juniors are working and the subject you teach, you may wish to adapt the handout to suit your own situation better.

Click on the cover to see a preview of my book on this subject: 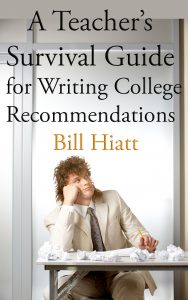 (The featured image was copyrighted by Monkey Business Images and licensed from www.shutterstock.com)